Emma Alcock’s work takes you by surprise. It doesn’t happen through a visual shock made by bold colours, outrageous subjects or large scale; rather, when you stand in front of her paintings there is a quiet presence to them that is difficult to forget.

The subjects of her work morph between the figurative and abstract and draw inspiration from everyday objects such as a vase, a glass, or an egg. In rediscovering the familiar items that surround us, she presents still and intimate images that evoke memories of the past.

Silhouettes and shadows come to life through veils of paint that she painstakingly applies, with an attention to detail that seems effortless but speaks volume of her mastery of the technique – the same that Rothko used to create his large colour fields. Layers of blue, red, orange, green and more build up to a finished work that reveals it’s rich structure and depth only upon close observation. Through this process the colours acquire a particular luminosity and vibrancy.

To make the complicated seem so perfectly simple is a rare talent that, along with all the above reasons, make me genuinely excited to represent Emma Alcock at The Fine Art Society. 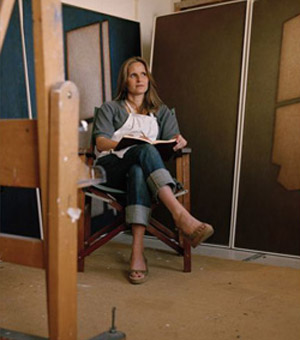 ‘I was impressed. Emma’s work has all the strength of feeling and containing quietude I expected – even more so – and the quality of the painting, texture and colour is superb.’
Julian Spalding – on ‘Stillness’ Exhibition, The Fine Arts Society 2017

Emma Alcock paints as an aid to contemplation. All paintings are journeys into stillness, in the sense that they are the creation of still images. Stillness, for Alcock, is quietness, the quietness that enables feelings and thoughts to emerge that are normally brushed aside in our rush-through lives. She clings on to sights familiar to her – flowers in a vase, reflections of trees, sets of steps – as if her life depended on them, and in a real way, it does, because in these she finds meaning, elusive yet memorable. She uses paint to trap feelings without throttling them, by means of a gentle but firm touch.

Her art veers between defined representation and total abstraction. In Light through a Window the light, as it dissipates, becomes more substantial than the window and the wall. The shaded flats on either side are crucial players in this drama of dispersal. Egg III is also a reversal. The egg becomes a drop of light in a space that has more substance than the egg itself. In the medium of paint, the membrane between the space and the egg – the shell – becomes diffused and semi-permeable, as all membranes are in living organisms. It is difficult to write about work as restrained and elusive as Alcock’s. Words fall clumsy in the face of the images she excavates, deliberately but instinctively, out of her consciousness of being present.
Julian Spalding, renowned art critic and former museum director

Emma paints flowers and plants and trees, but exquisitely organised into beautiful geometric architectural surrounds. The contrasts she creates provide both a rich sense of design in natural forms and a revelation of the influence of nature in man-made structures. She also has a wonderfully restrained, almost intangible use of colour that seems to belong to a previous age.
Theatre director Sir Trevor Nunn, who has collected Emma’s work since 1995